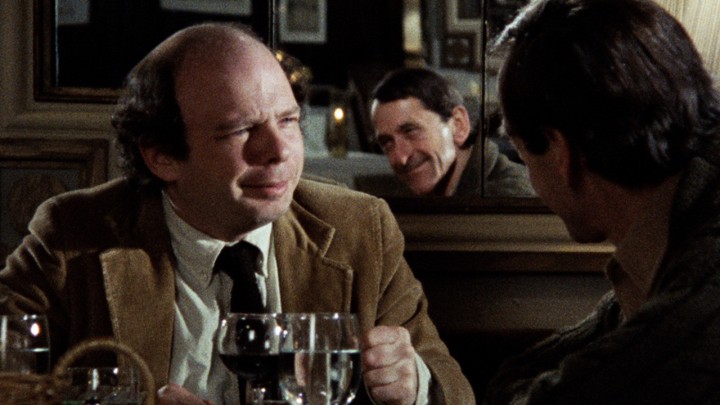 I love, love, love Wallace Shawn’s monologue in “My Dinner With Andre.” If you’ve never seen the film in its entirety (everyone tells me they’ve “seen clips”) I highly recommend you do. In the mean time, here’s the video of Wally’s seminal speech with text below. The setup: Andre has spent the last hour regaling Wally with wild stories of his creative and psycho-spiritual adventures. Now it’s time for Wally to weigh in. It’s brilliant.

WALLY: See, my actual response, I mean…I mean…I mean, I’m just trying to survive, you know. I mean, I’m just trying to earn a living, just trying to pay my rent and my bills. I mean, uh…ahhh. I live my life, I enjoy staying home with Debby. I’m reading Charlton Heston’s autobiography, and that’s that! I mean, you know, I mean, occasionally maybe Debby and I will step outside, we’ll go to a party or something, and if I can occasionally get my little talent together and write a little play, well then that’s just wonderful. And I mean, I enjoy reading about other little plays that other people have written, and reading the reviews of those plays, and what people said about them, and what people said about what people said, and…. And I mean, I have a list of errands and responsibilities that I keep in a notebook; I enjoy going through the notebook, carrying out the responsibilities, doing the errands, then crossing them off the list!

And I mean, I just don’t know how anybody could enjoy anything more than I enjoy reading Charlton Heston’s autobiography, or, you know, getting up in the morning and having the cup of cold coffee that’s been waiting for me all night, still there for me to drink in the morning! And no cockroach or fly has died in it overnight. I mean, I’m just so thrilled when I get up and I see that coffee there just the way I wanted it, I mean, I just can’t imagine how anybody could enjoy something else any more than that! I mean…I mean, obviously, if the cockroach–if there is a dead cockroach in it, well, then I just have a feeling of disappointment, and I’m sad.

But I mean, I just don’t think I feel the need for anything more than all this. Whereas, you know, you seem to be saying that it’s inconceivable that anybody could be having a meaningful life today, and you know, everyone is totally destroyed. And we all need to live in these outposts. But I mean, you know, I just can’t believe, even for you, I mean, don’t you find…? Isn’t it pleasant just to get up in the morning, and there’s Chiquita, there are the children, and the Times is delivered, you can read it! I mean, maybe you’ll direct a play, maybe you won’t direct a play, but forget about the play that you may or may not direct. Why is it necessary to…why not lean back and just enjoy these details? I mean, and there’d be a delicious cup of coffee and a piece of coffee cake. I mean, why is it necessary to have more than this, or to even think about having more than this. I mean, I don’t really know what you’re talking about. I mean…I mean I know what you’re talking about, but I don’t really know what you’re talking about.

And I mean, you know, even if I were to totally agree with you, you know, and even if I were to accept the idea that there’s just no way for anybody to have personal happiness now, well, you know, I still couldn’t accept the idea that the way to make life wonderful would be to just totally, you know, reject western civilization and fall back into some kind of belief in some kind of weird something. I mean…I mean, I don’t even know how to begin talking about this, but, you know…? In the Middle Ages, before the arrival of scientific thinking as we know it today, well, people could believe anything. Anything could be true: the statue of the Virgin Mary could speak, or bleed, or whatever it was. But the wonderful thing that happened was that then in the development of science in the western world, well, certain things did come slowly to be known, and understood. I mean, you know, obviously all ideas in science are constantly being revised; I mean, that’s the whole point. But we do at least know that the universe has some shape, and order, and that, you know, trees do not turn into people, or goddesses. And there’re very good reasons why they don’t, and you can’t just believe absolutely anything!

Whereas the things that you’re talking about, I mean…I mean…. You found the hand print in the book, and there were three Andrés and one Antoine de Saint-Exupéry, and to me that is a coincidence! But, and then, you know, the people who put that book together, well, they had their own reasons for putting it together. But to you it was significant, as if that book had been written forty years ago so that you would see it; as if it was planned for you, in a way.

I mean, really, I mean…. I mean, all right. Let’s say: if I get a fortune cookie in a Chinese restaurant, I mean, of course, even I have a tendency, I mean, you know, I mean, of course, I would hardly throw it out! I mean, I read it, I read it, and I just instinctively sort of, you know, if it says something like: “Conversation with a dark-haired man will be very important for you,” well, I just instinctively think, you know, who do I know who has dark hair? Did we have a conversation? What did we talk about? In other words there’s something in me that makes me read it, and I instinctively interpret it as if it were an omen of the future, but in my conscious opinion, which is so fundamental to my whole view of life, I mean, I would just have to change totally to not have this opinion, in my conscious opinion, this is simply something that was written in the cookie factory, several years ago, and in no way it refers to me! I mean, you know, the fact that I got–I mean, the man who wrote it did not know anything about me, I mean, he could not have known anything about me! There’s no way that this cookie could actually have to do with me! And the fact that I’ve gotten it is just basically a joke! And I mean, if I were to go on a trip, on an airplane, and I got a fortune cookie that said “Don’t go,” I mean, of course, I admit I might feel a bit nervous for about one second, but in fact I would go, because, I mean, that trip is gonna be successful or unsuccessful based on the state of the airplane and the state of the pilot, and the cookie is in no position to know about that.

And I mean, you know, it’s the same with any kind of prophecy or sign or an omen, because if you believe in omens, then that means that the universe–I mean, I don’t even know how to begin to describe this. That means that the future is somehow sending messages backwards to the present! Which means that the future must exist in some sense already in order to be able to send these messages. And it also means that things in the universe are there for a purpose: to give us messages. Whereas I think that things in the universe are just there. I mean, they don’t mean anything. I mean, you know, if the turtle’s egg falls out of the tree and splashes on the paving stones, it’s just because that turtle was clumsy, by accident. And to decide whether to send my ships off to war on the basis of that seems a big mistake to me.

Charles Bursell is a writer, performer, host and commentator heard nationally on SiriusXM, National Public Radio, and The Pacifica Radio Network. He currently hosts the podcasts Stream of Consciousness Talk Radio Theatre and Conversations With Charles Bursell. Both shows, and more, can be found on several platforms, including Apple Podcasts (iTunes) and Libsyn.com.